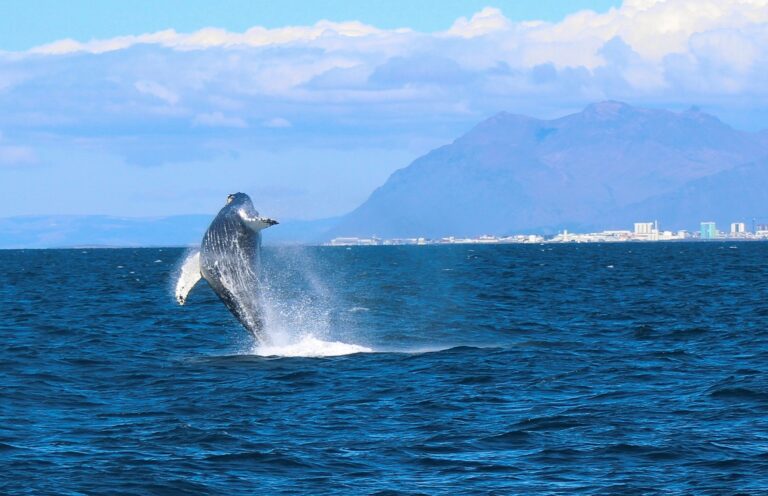 Humpback whales are a baleen whale, and known for their incredible breaching displays and heartbreakingly beautiful vocalisations. They are found all around the world, however have different mating groups, which results in different markings around the world. For example the Icelandic humpback whales have white pectoral fins on both the upper and lower sides, though the rest of the animal is normally a dark grey to almost a blue black. The most iconic markings on them though are on their tail flukes. These markings are as unique to each whale and can be used to identify them across the world throughout the years.

Most of the humpbacks we see in Iceland migrate to the gulf of Mexico every year to breed and give birth, but on this almost 10,000mile round trip they fast, living off their fat reserves. By the time they return to Iceland in spring they are reading to feed in our rich waters. On the route they are sometimes attacked by killer whales, who tend to target the young calves, drowning them by dragging them down by their long pectoral fins.

Their most common feeding technique is called lunge feeding, coming up from below a shoal of their prey, opening their mouth at the last possible second, and taking in a huge mouthful of water and fish together. Then, using their huge muscular tongue, they push out the water through their baleen plates, leaving a mouth full of delicious fish! We often find them in the same area of the less social and smaller minke whales.

Humpbacks also work together, making bubble rings to herd fish into a bait ball, therefore making it easier to consume. Normally if a group of humpbacks are hunting together there will be one individual chosen to blow the bubbles, possibly as it is a tricky skills to master.

It is one of the larger rorqual species with the females measuring up to 16m, the males being slightly smaller. They have great long pectoral fins, a third of their body length, and their dorsal fin has a lump of tissue and blubber in front of it, giving the iconic humped back look. Their rostrum is covered in tubercles, they look like little lumps, but they are in fact hair follicles. They are also found along the edges of the pectoral fins, and they are thought to aid in manoeuvrability, and humans have used this as inspiration to make more efficient windmills.

Like many other large whales humpbacks were once targeted by the whaling industry. Thankfully these gentle giants are no longer hunted in Icelandic waters. At one point it’s numbers had fallen by 90% before the whaling moratorium in 1966. Since then their numbers have grown, up to about 80,000 individuals, still less than pre-whaling times. However their largest threat continues to be humans, with entanglement in fishing gear, plastic pollution, noise pollution and ship strikes still affecting the population.