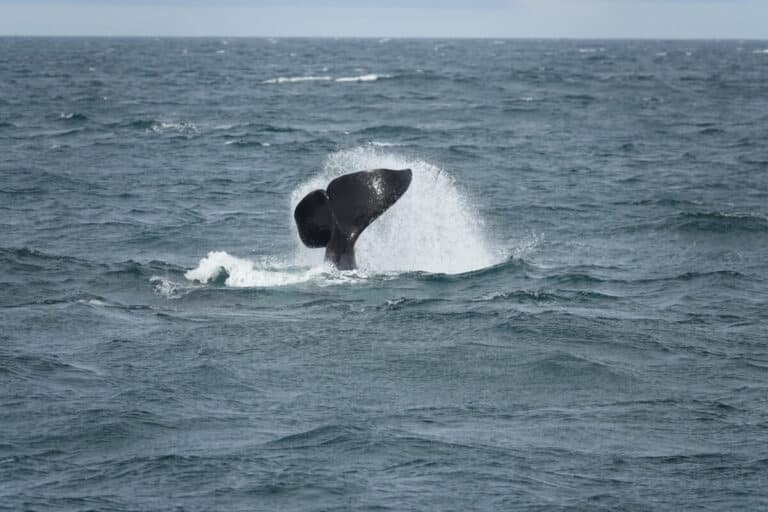 The killer whale, or orca is the largest member of the oceanic dolphin family. It is a toothed whale, as supposed to a baleen whale, and as such the males grow larger than the females, the former up to about 8m and the latter to 6m.  They separated from their baleen cousins about 34million years ago, and in that time evolved echolocation, a highly sophisticated form of natural sonar, also known as biosonar.

Their colouring is black with a white underside, a white eye patch and a lighter coloured saddle behind the dorsal fin. These markings vary in different groups around the world and can also be used to identify different individuals alongside other features such as fin shape and scars. The adult males have the iconic dorsal fin, as tall as 1.8metres high straight up, though it may fold down due to ill health and stress, in the wild only 1% have a collapsed fin, however in captivity almost all have a collapsed fin.

Killer whales are apex predators, which means that they have no natural predators, and they hunt in their pods, working together, because of this they are sometimes referred to as wolves of the sea. They have been recorded hunting baleen whales, such as minke whales, hence their name – Killer whales, coming from them them being whale killers. They hunt different prey around the world, from the baleen whales, pinnipeds and fish, to cephalopods like squid and octopuses, but also sea birds and sea turtles.

Killer whales are extremely social, living in close family groups called pods, lead by the matriarchs, who, being one of only 5 species that go through the menopause live for a long time past their breeding age. Male orca who live with their mothers live longer than those who have lost theirs.

These wonderful creatures mature slowly, the females at about ten years, and the males at 15. However they reproduce about only every 5years, but sadly 37.5% to 50% of calves die in the first 7months and the mothers are known to grieve for an extended period after a death. Female orca can live between 50 to 80 years, but most males only live 30 to 50 years.

The biggest threat to killer whales is the human race. Damming of rivers, crucial to the breeding of fish stocks, noise pollution, plastic pollution and captivity of wild whales (and the killing of other pod members to enable it) all deplete their numbers.

These extremely intelligent, socially complex, incredible creatures do not fair well in captivity, their life expectancies a fraction of the wild counterparts, only living into their 20s. For those few short years captive orca are kept alive with a cocktail of drugs, and often show aggression towards humans not seen in the wild. These creatures can easily travel 100miles in a day, so trapped in a pool as small as four times their body length, with their echolocation bouncing off the walls is inhumane.

No killer whales have been caught in Icelandic waters for over 30years, however they are still being caught in Russian waters. The best way to end this horrific behaviour is to stop supporting the places that display them. Take joy in viewing these magnificent creatures in the wild, and we urge you do not pay to go to any facility that has any captive whales, dolphins or seals.