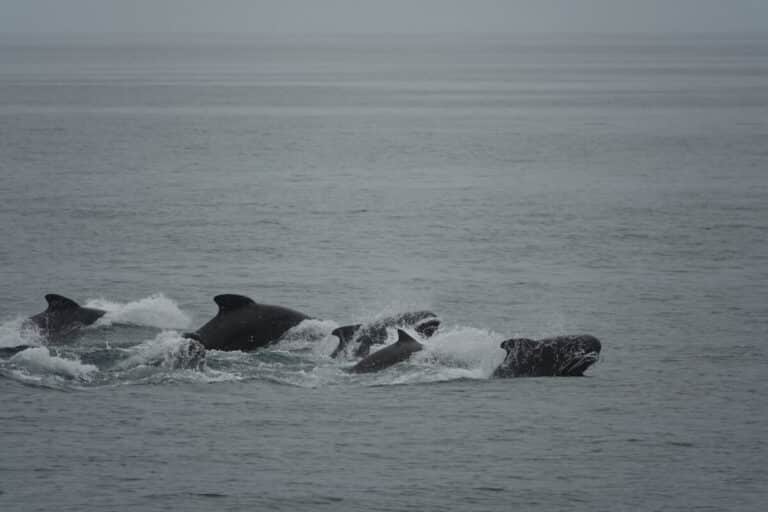 The long-finned pilot whale is the largest member of the oceanic dolphin family. It is a toothed whale, as supposed to a baleen whale, and as such the males grow larger than the females, the former up to about 6.7m and the latter to 5.5m.  They separated from their baleen cousins about 34 million years ago, and in that time evolved echolocation, a highly sophisticated form of natural sonar, also known as biosonar.

Pilot whales have bulbous heads, more pronounced on older males, making them easy to identify within the pod. Their coloring is black or dark grey with a like grey anchor-shaped mark on their underside. They may also have a light-colored saddle patch and eye mark, but that is less common. Their dorsal fin is thick and curved, about a third of the way down their back, and their name comes from their pectoral fins, which can be up to 27% of their body length, which is the main way to differentiate between them and their cousins, the short-finned pilot whale.

These astounding creatures are extremely intelligent, like their cousins the killer whale. They actually have more than twice as many neocortical neurons as humans, the only mammal with more is the orca. We could think it is because they sleep with half their brain at a time, so, therefore, need double the neurons in the awake side, however, that would only account for a doubling in number. There is a really interesting short article here about their possible intelligence levels. Definitely worth a read!

Long-finned pilot whales are extremely social, their pods can be just a few individuals to up to over a thousand, however they are most commonly seen in groups of between 20 and 150. Their social bonds are so strong that it is hypothesized that is why these creatures are so often stranded in large numbers. If one animal gets stranded the others may follow.
Another study of these whales showed many adults, often males, babysitting calves that are not their own.

Thankfully we no longer hunt this species of whale in Iceland, though it was hunted here historically, in a way similar to the drive hunting in the Faroe Islands. Other threats to them, like all whales, include entanglement and pollution. However, in nature, they have very few predators. It is thought the killer whales may attack them, however, there is no evidence to prove this. They are considered to be a top predator.