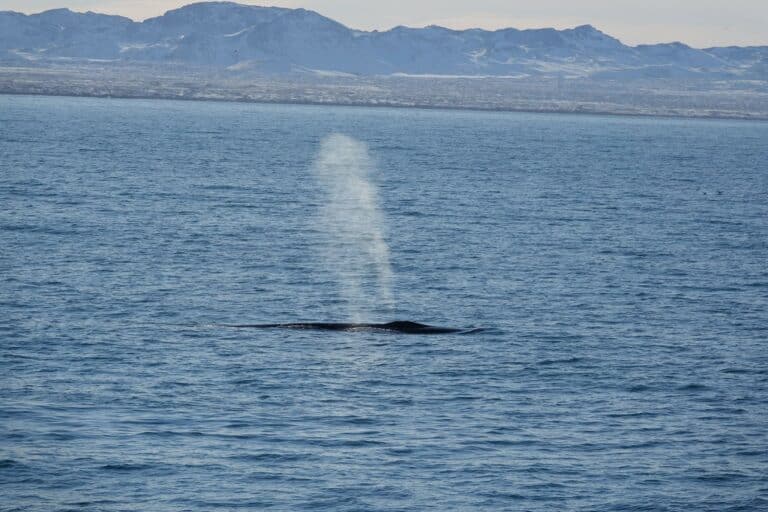 The fin whale is the second largest animal on the planet, after the blue whale, but despite it’s size, up to 25metres it is one of the fastest cetaceans, swimming up to 29mph, earning it the nickname ‘Greyhound of the sea.’ It can swim fast due to it’s long, slender, muscular body. It is a browny grey colour over all, but with a lighter underside. It has asymmetric colouring, on the right hand side of their heads there is a pattern of light and dark greys, and the lower jaw is much lighter, often white or light grey.

It is a large baleen whale, distantly related to the blue whale, the species separated 3.5million years ago. Despite this hybrids are well known to exist, showing characteristics of both species. Baleen whales have no teeth, instead they have baleen plates with act like a filter. They take a huge gulp of krill, or occasionally schooling fish, then push out the water through the plates, leaving them with a mouth full of food.

Fin whales are much more sociable than most baleen whales, frequently found in groups of between 6-10 individuals, though we also see them swimming alone, and at the other end of the spectrum they can be sen feeding in groups of up to 100. We had one in Faxa floi bay in 2020, the first on seen this close to the city in 3 years, mostly they are found about 30miles out to sea.

These amazing creatures are known to live about 95years, but may grow to be as old as 140! The females are sexually mature between 6 and 12 years old, but they don’t fully mature until 25-30years.

The fin whale is an endangered species after being heavily hunted in the 20th century. After the moratorium in 1967 most of the world stopped hunting these creatures although sadly Iceland and Japan have resumed it. Other threats to fin whales include noise pollution, ship strikes, plastic pollution and entanglement. The only other species that will attack and kill a fin whale are orca, who attack it as a group.