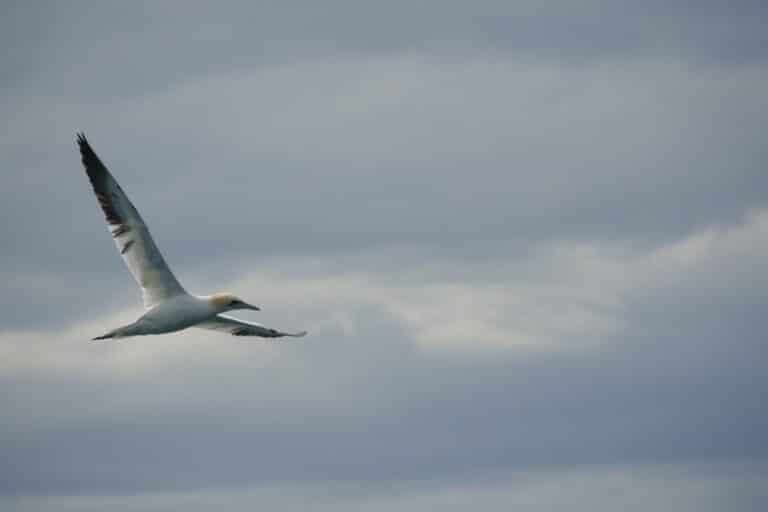 Some of the seabirds we frequently find in Faxa Bay, other than Puffins – Gannet, Cormorants, Terns, and Eider Ducks.

The seabirds we frequently see on our tours have a special place in our hearts, not just because they tell us the seasons, like the raucous Arctic Tern filling our skies in the summer months, but because they help us find the whales we adore so much. The cetaceans only surface to breathe, and are submerged, feeding for much of the time, we have to be looking in the right place at the right time to see a fin, or a blow, or anything else that might indicate the presence of a whale.

These seabirds can see further than us due to flying high, and will often be feeding on the very same fish as our gentle giants. So often they will be seen, a cloud of wings, in the distance as they dive down into the water to feed. That’s much easy for us to spot! The most dramatic feeder has to be the Northern Gannet.

Northern Gannet –  (Morus bassanus) is a large seabird, with a wingspan of up to 180cm. It is striking in colour, mostly white, with a dark end to its wings and a faint yellowy buff colour on its head, but it is most easily identifiable feature is how it dives. It will soar at over 30metres, scouting for fish, before diving down into the water at up to 100kph! Just before impact, it tucks its wings in making it perfectly aerodynamic.

Eider Ducks – (Somateria mollissima) is the largest duck in Europe, and is, of course, the source for eider down, which used to be used in duvets and jackets. Now it is used less frequently but it can be harvested sustainably, with no harm to the ducks. They live all around the coast of Iceland, breeding in colonies numbering from a couple of hundred individuals to many thousands! The females raise the chicks themselves, with young females acting as babysitters to the older ones.

Arctic Tern – (Sterna paradisaea) has an incredible migratory journey, flying on average over 70,000km a year if they are nesting here in Iceland. By flying from pole to pole it has two summers every year and sees more sunshine than any other creature. It is extremely aggressive in protecting its nest and young, and will fiercely swoop at creatures much larger than itself. Although it normally can’t cause serious injury it can and will draw blood, and this harassment can turn away even the most alpha predators, such as polar bears!

European Shag – (Phalacrocorax aristotelis) is part of the cormorant family, and we often see it with another seabird, the slightly larger Great Black Cormorant – (Phalacrocorax carbo). They both frequent our shores and are often seen standing on rocks and spreading their large wings out to dry. As they feed on fish they were once considered a threat to fishing and sadly were often killed, resulting in a plummeting of their numbers, however since that ended their numbers have grown.

This is just a tiny sample of the wide range of seabirds we see on a daily basis, and we often get keen ornithologists out with us, binoculars in hand!