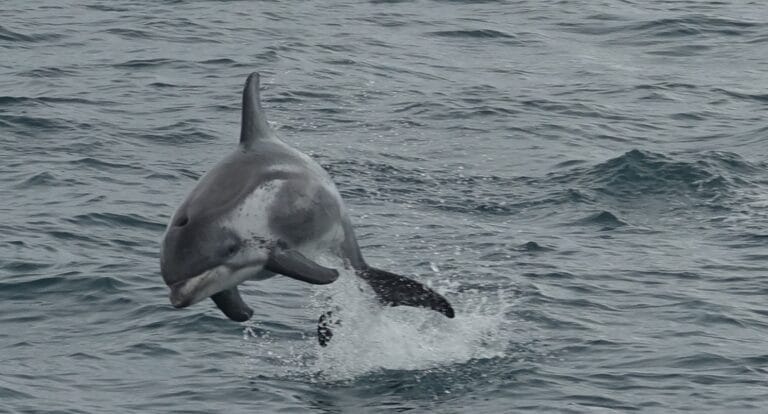 White-beaked dolphins are the most common dolphin species that we see in Faxa Floi. They often approach our boats to bow-ride and frequently are seen giving acrobatic displays to everyone’s delight. We also see them alongside minke and humpback whales, sometimes feeding, but sometimes seeming to be annoying them.

Fully grown they are about 2 or 3 metres long, but at birth only just over a metre. It takes a lot of care and energy to grow the calves from 40kg to their 350kg adult weight. They stay with their mothers for several years, with females reaching maturity at about 5years old, and males at 7. They must feed regularly, drinking a rich milk from their mothers, to increase their layer of insulating blubber that allows them to survive the winter. Sadly there is a high level of mortality in the first year.

They have quite a short beak, which is often white, hence both their common and latin names, however it can darken to a grey in older individuals. Over all they are grey, with lighter grey patches, including a saddle behind the dorsal fin, in a similar way to orca. Like so many ocean dwellers its underside is much lighter, almost white.

Technically a toothed whale this beautiful animal feeds on largely on fish, and sometimes we see them surface with a freshly caught fish in their beak. When they are teaching their offspring to hunt they will maim fish to slow them, allowing their young to practice hunting.

They are extremely social, living in a pod. We see them most commonly in groups of between 4 and 15, however they have been recorded in much larger groups. Within these pods they communicate with whistles and clicks, but they also use echo location to investigate their surroundings and look for fish to hunt.

As with all marine mammals their greatest threat comes from humans. Ocean noise pollution limits their communication, orientation and feeding generally, and excessive noise, such as from ships doing military testing or searching for oil reserves can deafen them permanently or cause them to panic and become stranded. Plastic pollution, hunting and entanglement in fishing gear are also threats for this species.