Puffins galore! A brilliant day exploring the islands around Reykjavik. 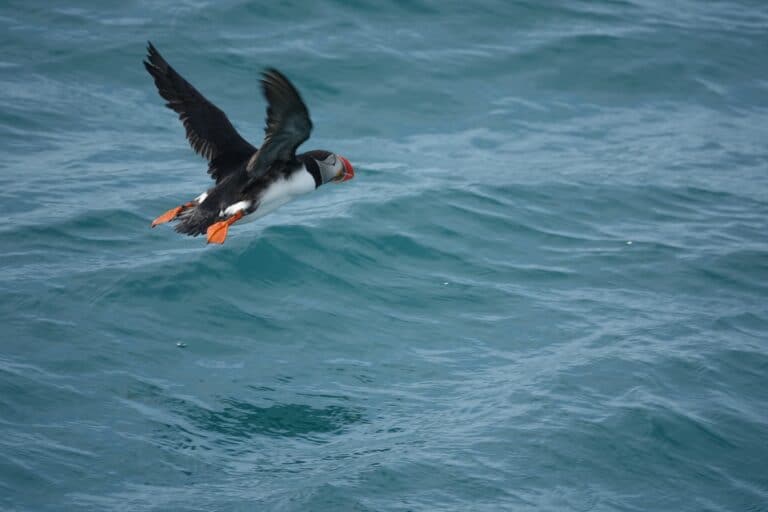 Puffins galore! A brilliant day exploring the islands around Reykjavik.

Such a great day on our speed boat, exploring the whole bay on our speed boat and looking out for puffins. Normally we do this trip on our superyacht, Amelia Rose but a special request meant we were off to see what we could see on our RIB.

We left from Reykjavik Old harbour, our rib is moored just next to our superyachts, so we took the opportunity to have a cup of hot chocolate before we set off! We put on our insulated suits as in the speed boat the wind feels very cold even in glorious weather like this. There’s always something awesome to see in the bay, but going out on the speed boat made it feel extra special today. Also, we were taking out one of our friends who, despite living here for many years has never seen their home city from the water! It’s like seeing Reykjavik again for the first time!

Akurey was the first island we passed, not often visited, except by us, as it is rather small compared to Engey and Videy. There we found several puffins, but we knew there was more further out, so we watched their antics for a little, but we hoped to see more later on. The waters here are teeming with life and around this island we often find porpoises feeding and playing.

We make sure to keep an eye out for larger cetaceans too, like the white-beaked dolphins, or their great cousins, whales. Minke whales often love to come in amongst the islands regularly and even the mighty humpbacks will come all the way into the harbour, right up to where we keep our boats! There are also lots of seals in the bay, both harbour and grey, and they are always a joy to see with their big puppy dog eyes.

If you really want to see whales when you are in Reykjavik, Iceland, then have a look at our specific whale watching tours, we head further out to a feeding ground that we know they often frequent! The success rate is great thanks to the skill of our crew combined with the natural richness and underwater landscape of the waters here in Iceland.

We carried on on our island explorer cruise, to the next island, called Engey, the second largest island in the bay. Despite being relatively large it isn’t inhabited, but as far back as the early 13th century there was a farming and fishing community living on it. Now the only building there on it is a lighthouse, a dynamic and beautiful building in its own right, and makes for a beautiful focal point for any photos taken by our customers.

Behind it we had the glorious mount Esja, now with only the faintest dusting of snow on her peak! With mountains one way and the stunning city scape the other we are spoilt for choice and always can take great photos!

After Engey island we went towards Lundey, better known by its English name. The name translates as Puffin Island and like the name suggests it’s home in the summer months to a bustling colony of Atlantic Puffins, one of several in the bay. Here in Iceland we have 60% of the world’s population nesting, and, despite not being our national bird which is the gyrfalcon, it is beloved by Icelanders as well as tourists for its bright colourful plumage and clumsy antics! Despite the island being known for the puffins, it is a safe haven for many types of sea birds. Today there were hundreds, maybe thousands of puffins everywhere. It was a joy to see them!

The last island that we passed close to on our Island Explorer cruise was Videy. During the night, for certain dates the- Imagine Peace Tower is lit from this island, shining up into the empty sky above us. During the day however, from the boat, pieces of art, designed by Richard Serra, can be seen positioned around the island.

Then the Island Explorer Cruise took us home, close along the coastline of our capital city, Reykjavik itself. We passed the famous Hofdi House where the meeting between Ronald Reagan and Mikhail Gorbatsjov happened, effectively bringing an end to the Cold War, then the Sun Voyager sculpture, and finally the dynamic cultural centre Harpa.

Once again we made it back safely after a wonderful day out exploring the islands, and it was made even more spectacular by us being able to show locals their home from a different point of view!