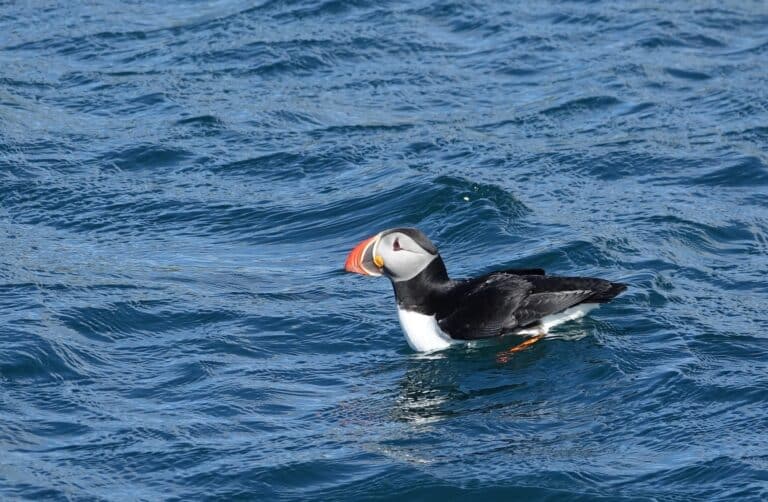 A bright summers day taking people out on a puffin trip, departing from Reykjavik Old Harbour on our beloved yacht, Axel Rose. We took our lovely customers all around the fascinating islands that provide nesting grounds for the Atlantic Puffins every summer.

We are based in the city of the old town in Reykjavik, easy walking distance to everything! Today we took our smaller yacht out, which gets us really close into the islands where the puffins nest. The weather was gorgeous, and it is light almost all the time now, the short dark days of winter are behind us! Though we look forward to seeing the stunning Northern Lights again one day soon.

For whatever purpose we are out on the water for, be it looking for whales, or fishing, or going on our island explorer tour, the scenery is stunning. We have the cityscape of Reykjavik shoreline on one side and the great mountain of Esja on the other so every photo our lovely customers take has an incredible, dynamic background.

The first island we passed was Akurey, often overlooked as it’s much smaller than the other more popular islands of Engey and Videy. We often visit it in the summer to look for the puffins and other sea birds who nest there, safe on its craggy shoreline. Sometimes we see seals over here too, their gorgeous big puppy-eyed heads above the water level as they come up to breathe and look around. This isn’t one of the biggest colonies, but it is always worth checking out multiple ones on different islands because you will never know what you will see!

As well as seabirds, in the water around the islands of the bay we frequently see mesmerising animals like harbour porpoises, and the most commonplace that we see them is just inside Akurey! It must be a great fishing ground for these dynamic creatures, and we have seen them hunting and playing there countless times.

The bay is also frequented by larger cetaceans such as the white-beaked dolphins, or even whales. We see Minke whales amongst the islands regularly and on several occasions we’ve had humpbacks come all the way into the harbour, right up to where we keep our boats! If whales are what you are looking for then please consider our specific whale watching tours, we head right out into the open water to a feeding ground that we know they frequent! We have a very high success rate thanks to the skill of our crew, and the natural richness of the waters here in Iceland.

Carrying on on our puffin trip, we went to the island of Engey, the second largest island in the bay. Despite the size of it, it isn’t inhabited now, however, as far back as the early 13th century there were farming and fishing communities on it. A lighthouse, which is beautiful in its own right, is the only building on it now and it makes for a beautiful focal point for photos. Some puffins have their burrows here, but not as many as the other islands so we continued on our trip.

The next island we came to was Lundey – or Puffin Island. It is very well known because, as its name suggests, it is home in the summer months to a huge colony of Atlantic Puffins, we have 60% of the world’s population here in Iceland and despite not being our national bird – that’s the gyrfalcon – it holds a special place in all of our hearts with its jolly colours and clumsy antics! Despite it being known for the puffins it is a haven for all sorts of sea birds. We stayed here a while and enjoyed the antics of this funny and adorable bird.

The last island we pass on our puffin trip is Videy. An hour after dark, during set dates in winter, the Imagine Peace Tower is lit from here, shining its beacon into the skies above us. But during the day, from the yacht, you can see pieces of art around the island, designed by Richard Serra. However along one side there is a huge colony of puffins, there are hundreds of them all around us and they are such a joy to watch!

After all of this the puffin trip takes us home, along the coastline of our beloved Reykjavik City itself. Along it you’ll see the famous Hofdi House where the meeting between Ronald Reagan and Mikhail Gorbatsjov happened, effectively bringing an end to the Cold War, the Sun Voyager sculpture, and the cultural centre Harpa.

We made it back safely after a beautiful day enjoying the best weather Iceland could possibly have given us! Everyone got great photos of puffins as well as so many other seabirds, what a wonderful puffin trip!